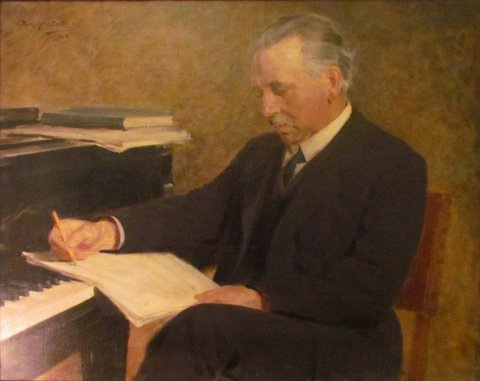 Armas Järnefelt’s career as a conductor is generally considered to have begun in the autumn of 1893, when he and his wife were hired for the spring season in Berlin. Between the years 1893-1898 they were engaged in several short-term positions in Berlin, Bremen, Hamburg and Dresden. In addition, they were employed for the entire season 1895-1896 in Breslau, 1896-1897 in Magdeburg and 1897-1898 in Düsseldorf. Maikki Järnefelt (formerly Maikki Pakarinen) was frequently featured as soloist, while Järnefelt worked both as a répétiteur or as assistant orchestral conductor. In the autumn of 1898, Järnefelt started a position as music director in his country of origin when he took responsibilities at the Wiborgs Musikvänners Orchestra. With this new position, he was able to present Finnish music, with programmes of Sibelius, Kajanus, Mielck, Pacius, Ekman, Merikanto and Auer, as well as his own compositions to the audiences of Viborg. Also noteworthy of his first season as music director in Viborg, was that now the concert programmes were written in Finnish!

It is a challenge describing Armas Järnefelt’s work as a conductor in anything but general terms. His contribution as a conductor, as the audience perceived it, is lost forever as we are void of any filmed material. That which has survived are the Odeon recordings he made in Berlin (1928-1930), those from Stockholm (1929, 1931), as well as a recording of the Sibelius Violin Concerto with Anja Ignatius as soloist, recorded for Polydor in Berlin (1943). Although the members of the Berlin State Opera Orchestra involved in the recording didn't have enough rehearsal time, Järnefelt managed to keep the ensemble together and create a special atmosphere. Besides the above mentioned recordings, we also have the engaging radio broadcasts. Unfortunately, no works of Beethoven have survived.

Armas Järnefelt was heavily influenced by the conductor Hans von Bülow, whose concerts with the Berlin Philharmonic Orchestra he often attended during his years there (1890-1893). During those years he also acquainted himself with the music of Wagner, attending fifteen performances of Tristan and Isolde in a row, aquiring standing-room-only tickets!

Above all this, his period of working together with Conrad Nordqvist in Stockholm was paramount. Järnefelt found his small, but precise gestures exemplary . Within a decade, they shared the responsibility of over two hundred performances per year. By the season of 1907-1908, Järnefelt had no less than twenty operas in his repertory as well as most of the Opera Orchestra’s monthly orchestra concerts. In March of 1908 he conducted Wagner’s Ring Cycle in its entirety within a week! Das Rheingold on Tuesday, Die Walküre on Wednesday, Siegfried on Saturday, and the Twilight of the Gods on Monday! He returned to the Ring Cycle in 1911 and 1924, taking upon himself the directing responsibilities as well in the latter. As assistant orchestra conductor, from 1911 as Music Director, and from 1923 First Music Director, Järnefelt’s expertise seemed endless.

He also championed new music premiering several operas from contemporary composers such as Kurt Atterberg, Natanael Berg, Wilhelm Peterson-Berger and Ture Rangström, as well as incorporating in the repertoire of the Opera Orchestra such demanding works as Honegger’s King David, Mahler’s Eighth Symphony, and Schönberg's Gurrelieder. Yet, returning again and again throughout his career were the symphonies of Mozart and the works of Wagner, especially the Tannhäuser overture. His scope of repertoire was tremendous.